Recently on the glibc mailing list someone asked why popen or system tend to fail with ENOMEM on some environments, even when it seems that the system does have enough available memory.

As we discovered in the thread, it is due the fact that glibc popen and system functions use the tandard UNIX way of creating process by calling fork followed by execve. The fork is usually implemented as a syscall and Linux implements a copy-on-write optimization to speed up execution. It means that for most cases where the child process just does trivial computation followed by exec syscall to spawn a new process, no kernel page allocation copies will be performed.

So does it mean that as long the code does not trigger a memory write in either parent or child (forcing the kernel to actually copy the affected page range) fork and execve should show good performance? Unfortunately the kernel work required to allocate a new task structure plus the page table replication is not trivial. Profiling with a simple benchmark shows that most of time spent trying to spawn a simple binary (/bin/true in this case) is in the kernel space. On a x86_64 machine:

This may vary is bit between architectures, but it still costly. On powerpc64le for instance:

It gets even worse when the parent or the child does memory write, since it will trigger deep copies in the kernel to actually replicate the pages.

To try and fix this performance issue, UNIX-like system started to provide the vfork syscall. It was standardized by POSIX and it behaves similar to fork with two important differences:

Besides these two main differences vfork behaves much like fork, with child not duplicating the process facilities described in fork man-page. vfork indeed requires much less work than fork and has much better scalability (since the work required to duplicate the internal kernel bookkeeping is constant regardless of the process RSS size).

And even with caveats described in the vfork man-page, programs do use it due its advantages over fork. Glibc, for instance, implemented the posix_spawn with vfork until recently to take advantage of vfork performance over fork.

However since its introduction vfork has inherent issues and its subtle semantics make it hard to use as a complete safe replacement of fork. Rich Felker has written an extensive post entitled vfork considered dangerous which describes these problems in much detail:

There are additional issues about on how stack is shared between parent and child, where the compiler needs to be aware of vfork specific semantics to avoid spilling data during code generation (GCC has improved its support, but it is not guaranteed that all compilers would have a quality implementation).

To again try and fix these issues and help system without MMU (which fork implementation is either subpar or impossible), POSIX.1-2001 added the posix_spawn interface. It is a much more complex interface than fork or vfork, however the environment has some freedom regarding its internal implementation and it allows possible future extensions either through new attributes or new file actions. Glibc initial implementation used the fork plus execve and later added a vfork path (controlled by the GNU extension POSIX_SPAWN_USEVFORK).

However since glibc posix_spawn used either fork or vfork internally, it suffered from the same issues described (more specifically BZ#10354, BZ#14750, and BZ#18433). Worse (or better) the vfork optimization was only enabled if no flags was used and the old implementation also suffered from unrelated issues as well (such as not reporting child execution errors).

Motivated by the ewontfix post and MUSL implementation (which implements an optimized posix_spawn using clone plus CLONE_VFORK) I decided to improve the glibc one. After some iterations, glibc 2.24 shipped with an improved implementation of posix_spawn for Linux with the following changes:

The new implementation fixes a lot of issues from previous one and it also shows much better performance and scalability. Using the same benchmark as before, the new posix_spawn implementation is much faster than fork plus execve and even slightly faster than vfork: 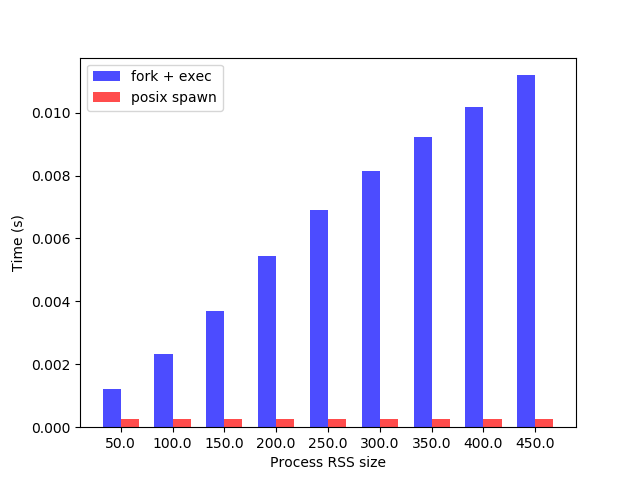 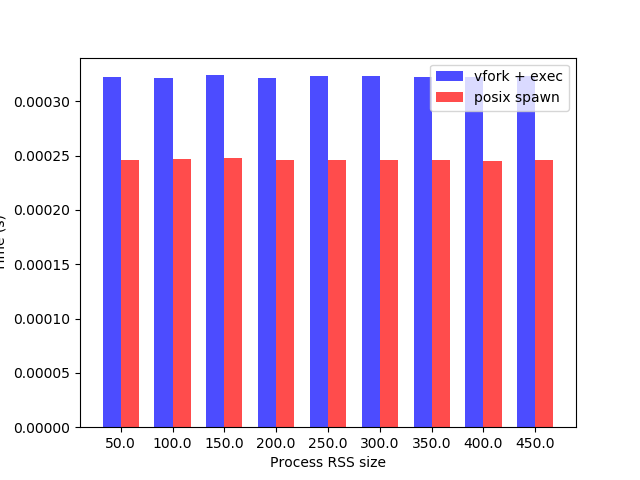 The process RSS size is measured in MB and time is an arithmetic mean of 10000 executions of a simple process (/usr/bin/true in this case). The posix_spawn shows similar scalability as vfork, it does not suffer from the fork issue when programs with large VMA usage failed with not enough memory (and forced some users to explicitly enable overcommit to fix it) when trying to spawn new processes.

So what is preventing developers from using posix_spawn instead of either fork and vfork? Unfortunately it is because the posix_spawn API does not cover all possible scenarios a process might require when spawning new processes.

There is an interessting discussion about the current limitations of posix_spawn and a proposal for new extensions (as was done for POSIX_SPAWN_SETSID, for instance, implemented on glibc 2.26). To summarize thekey points:

All these issues prevent some projects from using posix_spawn or at least required extra boilerplate code to handle these limitations. On the mentioned libc-alpha discussion, it was hinted that OpenJDK still uses vfork on linux for JNI code because of the fork memory and performance issues.

So how does one use posix_spawn for its over vfork where the program still requires to do unsupported file actions? One option is to narrow down missing APIs and add them on POSIX specification. This is can take a lot of time and may not be available readily on different systems. However this is the path taken in the current glibc implementation, where extensions might render the implementation non-standard and might even conflict with future POSIX specifications, requiring even more complexity to handle compatibility modes.

Another option, which some programs use, is to use a helper program to actually launch the desired binary. The helper program basically executes some options selected by some arguments (such as move to another folder or close all related files) and uses the rest of the arguments to spawn the desirable program. The drawback is the program will need to deploy and use an external binary, which would require to spawn an extra process adding overhead on process spawning. This adds even more code complexity to handle the extra possible file actions.

A third option is to add another process spawn interface which would work similar to vfork, but with the internal guarantees of posix_spawn (dissociated stack for child and parent, no shared signal handler, cancellation disabled) and by calling a user-provided callback. The callback would be responsible to execute any file action or extra computation. This has the advantage of freeing the process spawn API to define any possible extra operations (like resetting signal handler or opening a file). Extra care would be needed to define which set of functions would be allowed on the callback, since functions which modify shared state may result in undefined behavior (similar to signal handlers). The thread that discusses system and popen failures also has some insights on this possible API.